Having started to look at some history of the area I found that there has been an archaeological dig down in the village where there are the remains of a medieval castle and the more I look into it the more interesting it gets and will probably deserve its own page in time.

There has been evidence of stone age settlements on the river at the bottom of the valley, and Roman silver coins have also been found in the vicinity. I actually got interested originally after reading about the Lindisfarne monks who wandered the area looking for a new place to settle carrying the body of Saint Cuthbert as they went. They eventually settled in Chester le Street.

Anyway I mentioned it might be worth taking a metal detector onto our two fields and guess what, Nathan one of the crack team of tradesmen we have assembled happens to be a detectorist.

Anyway within 2 minutes and a meter into the first field with his detector on the blink we have a find. Its a spoon, how very exciting!. It is made from quite a thick metal which means its not modern. I will see if we can find out more and update you. It could possibly be silver.

About a week later Nathans brother Mark also a keen detectorist came out to the Farm and lent me a detector and gave me the 5 minute introduction and etiquette and off we went. More treasure! A bit of tin foil and a fizzy drink can to start with but then I found my first coin which was a Victorian halfpenny!.

I have to say at this point I was freezing and wet. You have to get on your knees in the mud and thumb through the mud with your hands once you have identified a place to dig. I wasn’t really prepared for it. So not having much spare time and needing to get back to the chaos of our building site I left Mark to it. In an hour he came back with 5 or 6 coins in total. Two of which were silver. There was some excitement in the air. 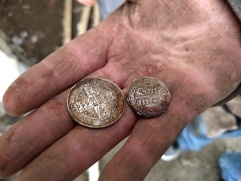 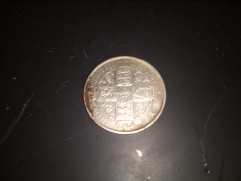 After some research the larger silver coin ‘One Florin’ dated 1834 is worth ~£50 – £100 maybe – if it had been minted the year before then it could have been worth £9000. That would have caused a dilemma because we would like to keep the finds and put them on display or make some kind of feature of them in the cottage but I would have to cash that in I think to help pay for the renovations.

Another interesting find was a button, at first a very minor curiosity as it appeared to have some nice detail on it depicting a hare. When I cleaned it up you could make out writing on the back which dated the coin – very nice: “New Sporting Designs 1844”. After some googling this turns out to be a ‘hunt button’. Think red jacket, jodhpurs and 20 people on horses and 50 dogs trying to catch a fox. Did you know that different ranks within the hunt can be determined by how many buttons you have on your red jacket? 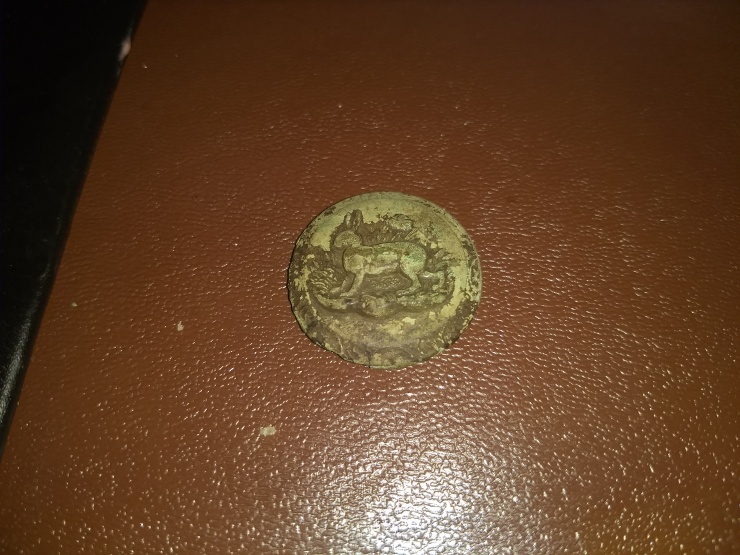 I expect we will find more curios and coins which I think will make a nice display for visitors. It also gets you thinking as to who was here before us and what they were doing 150 years ago. I feel another poem maybe in order! (see the mouse and the shrew post).